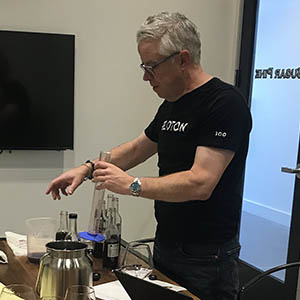 Raised in Austin, Texas, Adam Lee found his love of wine while selling wine for Austin Wine & Spirits and as a wine buyer for Neiman Marcus. His favorites? Burgundies and California Pinot Noirs. In 1993, he moved to California, worked in a tasting room and only one year later he started Siduri Wines. Siduri soon had a cult following and Adam became known as one of California’s premier Pinot Noir producers.

Adam has made Bucher Wines since its 2011 inception, working closely with John out in the vineyard to make sure that what is in the vineyard is present in the bottle. In 2015 Adam sold Siduri to Jackson Family Wines, and he stayed on as Founding Winemaker. In addition to Bucher, Adam is making wine for his own label, Clarice, and has his hand in a range of projects from California to France.