We are now Open for Tastings at Grand Cru Custom Crush 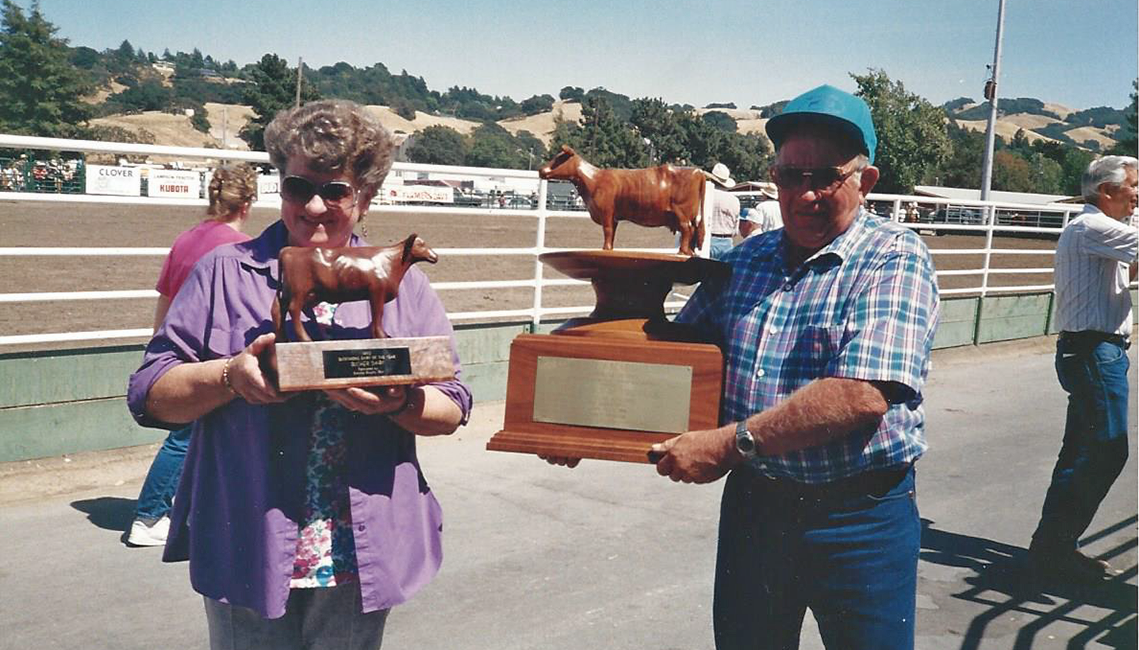 The following is a reprint from the Healdsburg Tribune written by Shonnie Brown in 2008 to honor and celebrate Joe and Annemarie Bucher’s 50th wedding anniversary.

About five miles out Westside Road I turn right at a white fence with a Clover Stornetta sign announcing “Bucher Farms.” I continue up the driveway past a couple of barns and the farm office until I find John Bucher who welcomes me, ushering me into a small home on the property where I sit down with John’s parents, Joe and Annemarie.

I have come because there is history here. Joe and Annemarie immigrated to California from Luzern (Lucerne), Switzerland in the 1950s. Born in 1929, Joe came from a family of dairy farmers in the tiny town of Inwil, ten minutes from Luzern. Joe grew up during World War II in Europe. Although Switzerland’s main goal was to remain neutral and stay out of fighting, many of Joe’s teachers enlisted in the Swiss Army to protect Switzerland’s border with Germany after Hitler invaded Poland in 1939.

“I was in the fourth grade,” Joe tells me. “Our teachers left immediately and we grew up with substitutes––mostly untrained. Our farm helpers also left. Even our horses were drafted to pull cannons, etc., so we had to train bulls and oxen to do the farm work.”

“Our families were friends in Inwil,” Annemarie adds. “My dad, the town postmaster, also went to guard the border. We only rode bikes in Inwil and went everywhere on them. I recall helping Dad deliver the express mail at night.”

Annemarie was actively involved in mandolin concerts, the church choir and town band as well as town plays. Like her mother, she learned dressmaking and fashion design, sewing and designing for local models.

Joe’s older brother took over the family dairy farm after the war. So Joe felt there would be more opportunity to have his own farm in the United States. He immigrated to San Jose in 1951 and worked on a dairy farm in Santa Clara until he was drafted during the Korean War. Then he was sent to Germany.

“They drafted me before I was a citizen, so I applied for my citizenship while training in Texas and got sworn in in Germany,” he tells me.

“I knew Joe from childhood, but it was so strange to have him show up in American military clothes,” Annemarie recalls. “He came to see me but I had no idea what I was getting into! I knew nothing about America. Joe sponsored me for a visa but I had to wait two years. When I arrived here, it was a huge change and I felt lost.”

Annemarie took a job in San Francisco as an au pair to six children while Joe worked as a gardener for the same family. Their boss, a Mr. Bullis, belonged to the Trailblazers riding club. One day he asked Joe to come along and care for the horses while Trailblazer members rode in the Russian River Valley-Healdsburg area. Joe fell in love with the area and began looking every day in the San Francisco Examiner for a dairy to buy. They found the property, got married in December 1958 and began working their new dairy in January.

Settling in was particularly challenging for Annemarie who didn’t speak English or know how to drive an automobile. She recalls that Mrs. Lindstrom was greeting newcomers in Healdsburg and they were introduced to another Joseph Bucher, a German butcher and his Italian wife, Delphine, who lived in nearby Alexander Valley.

“They were so nice to us,” Annemarie recalls. “We met Delphine’s siblings. Josephine Camaur, the only sibling still alive, has remained our friend all this time.

“And thank God I had a Swiss friend, Mary Rueger, who taught me how to drive!” she continues. “Mary helped me with all the questions on the driver’s test. Joe was busy working, but I was so homesick until we began having kids. All three of them—Heidi, John and Tim—were born in the old hospital and delivered by Dr. Schubert. After I had three, the doctor said, ‘No more, young lady.’”

We are actually having two conversations now. Joe likes to talk about the farm and Annemarie wants to tell me about family and friends. But Joe wins the contest by pulling out a Clover Stornetta milk carton with a family photo and a “profile of excellence” blurb on the history of Bucher Farms. I learn that the dairy was once part of the 11,000 acre White-O Ranch, which dates back to the early 1930s. Joe and Annemarie purchased the 360-acre dairy portion and 50 dairy cows with a few calves–what Joe calls a “rainbow herd” of Jerseys, Holstein and Guernseys.

“It took years to build the herd up to 650 cattle,” he now tells me. “We’ve increased and improved the quality of the herd through selective breeding. All our cattle are descendants of the original 50.”

For years they belonged to Petaluma Cooperative Creamery, which began in the early 1900s. Clover Stornetta was formed from the “kaput” creamery and Stornetta’s Dairy. Clover Stornetta has rigid guidelines for excellence and it is quite an honor to be chosen as a “North Coast Excellence Certified” Clover Stornetta dairy. And now they also produce organic milk from cows raised on a strict diet of organic alfalfa hay and grain.

“Eighteen years ago I decided to train myself for U.S. citizenship,” Annemarie proudly declares. “John was the only one who knew. We surprised everyone, even Joe, when I passed my test and was sworn in.”

And they have a very prosperous second business:

“We sell our manure mostly to vintners and landscape companies,” Joe tells me. “I made the first deliveries in my pickup between milking. Then I had to get a dump truck. Now big trucks come and take it away. Part is in solid form; part is liquid, which we spray on the fields. We can’t have run-off into the river, so we have ponds in the hills, which hold the liquid in winter. Once, a neighbor complained about the smell, but then that particular neighbor had a fire on his ranch. Helicopters came looking for a lake from which to draw water. From the air, my pond looked just like water… so they helped themselves.”